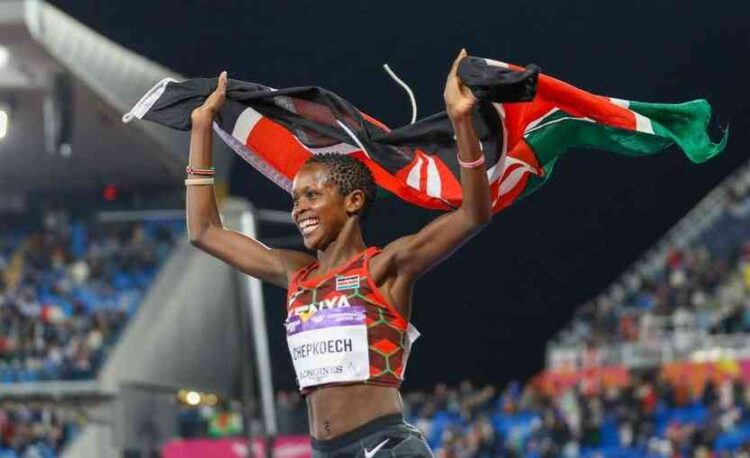 Chepkoech won the championship record in a time of 9:15.68 minutes, making her the new commonwealth champion in the women’s 3000m steeplechase.

Chepkoech led the race in the last round and kept increasing her pace till she crossed the finish line.

Uganda’s Peruth Chemutai was leading in the first rounds of the race though she took a mean fall in the last round, she pushed through the pain and managed to come in third in a time of 9:23.24 minutes taking the bronze.

Elizabeth Bird of England increased her pace in the last few seconds and beat Chemutai finishing second in 9:17.79.

Chepkoech ran steadily behind Chemutai as they led the race with a big gap from the rest of the group, till close to the end of the penultimate round and then she took off.

She reclaimed Kenya’s title in the 3000m steeplechase.

“I was so confident of victory. My plan was to take off with two laps to go and beat Chemutai. She wouldn’t have beaten me even without the fall but I am sorry for her.” said Chepkoech.

She dedicated her win to her parents Wilson Chepkes and her mum Juliana back home in Olenguruone, Nakuru county. “They have given me all the support and time to train and that gave me the peace of mind to concentrate on training.”

“Above all I wouldn’t have achieved this without God, I thank Him for His grace and for good health.” Chepkoech further stated. She also congratulated Kenya’s Faith Cherotich who won the World Under-20 3000m steeplechase in Cali, Colombia.