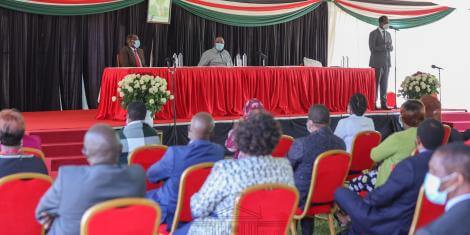 Jubilee party has today held Parliamentary Group (PG) meeting chaired by President Uhuru Kenyatta at the State House in a bid to strategize ahead of August polls.

The main agenda was to plan a National Delegates Conference (NDC) where Kenyatta is expected to endorse Orange Democratic Movement (ODM) party leader Raila Odinga as his preferred successor.

Kenyatta will use the NDC to explain his reasons for backing Raila’s candidature in the August 9 General Election and unveil his planned tours of Mount Kenya region that aims at depopularizing Deputy President William Ruto.

The PG has decided that President Kenyatta should retain his position as the Party Leader and will run the affairs of the ruling party ahead of August polls.

This means that the President will seek a coalition with like-minded parties and support its presidential candidate ahead of August poll.

DP Ruto on the other side is expected to quit Jubilee in two months time as he forms Kenya Kwanza Alliance with Amani National Congress (ANC) and FORD-K.