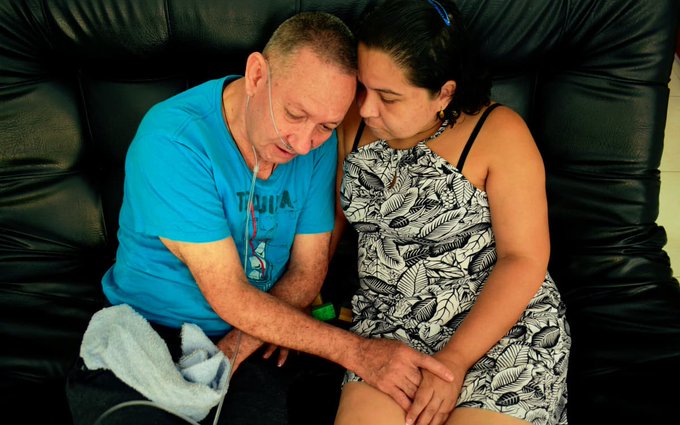 Victor Escobar with his wife before he ended his life. [Google Photos]

A Colombian man with painful lung disease has cursed life and proceeded to end it becoming one of the first people in Catholic Latin America to end their own lives under a new euthanasia policy. Victor Escobar, 60, despite not being terminally ill ended his life at a clinic in Cali, the capital city of Colombia’s Valle del Cauca province, late on Friday. He suffered from end-stage chronic obstructive pulmonary disease, which he said greatly diminished quality of his life.

Escobar was a Catholic, who had for two years fought for his right to euthanasia in the face of great opposition from doctors, clinics, courts, and the church. The Colombian government de-penalized assisted death in 1997, and in July 2021 a high court issued a ground-breaking ruling expanding this to the ‘right to dignified death’ to those not suffering from a terminal illness but are degenerative.

‘We reached the goal for patients like me, who aren’t terminal but degenerative, to win this battle, a battle that opens the doors for the other patients who come after me and who right now want a dignified death,’ Escobar said in a video message.

“Little by little, it becomes everyone’s turn. So I do not say goodbye but rather, see you soon. And little by little we will end up with God,” he added.

Escobar said he didn’t think God will punish him for ending his suffering as God doesn’t like when people suffer. He was escorted to the doctor by his lovely wife who he kissed and had personal last moments together before dying.

The courts also granted permission for another woman, Sepulveda, to die after she also applied to be allowed to end her life.  She had been diagnosed with amyotrophic lateral sclerosis (ALA), also known as Lou Gehrig’s Disease, in 2018. The government says at least 157 people have chosen euthanasia since the July 2021 legal change.