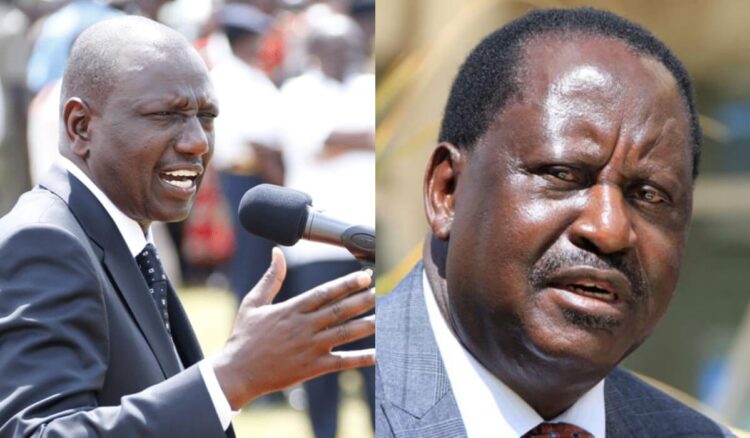 While speaking at Jacaranda in Nairobi on Sunday, DP Ruto said Raila was a a mastermind of chaos and has a track record of calling for mass actions.

This comes a day after Raila Odinga vowed to jail thieves in government, a statement that Ruto allies said was directed at their boss who has been mentioned in many graft cases.

Raila was speaking at Thika Stadium in Kiambu where he kicked off his campaign rally in style in what many political commentators said, “Baba has finally climbed the Mountain”.

Raila criticized Ruto’s heavy pockets claiming that his charity and handouts are from public fund that he has been stealing.

DP Ruto is now focusing on raiding the perceived Raila’s bedrooms in his Monday rallies. DP had said Kenyans should do away with bedrooms. “We will not allow anybody to balkanise the country and create bedrooms,” he said.

Asking him to accept defeat, Ruto wants Raila to promise he won’t call for mass action as witnessed in the last election where ODM leader and his allies headed to supreme court and rallied Kenyans to strike.

“After beating him in August 9, he should not call for mass action and demonstration. He should accept the wishes of the people of Kenya,” DP Ruto asked.