How Ruto, Mudavadi and Wetangula Plan to Share Power After Election 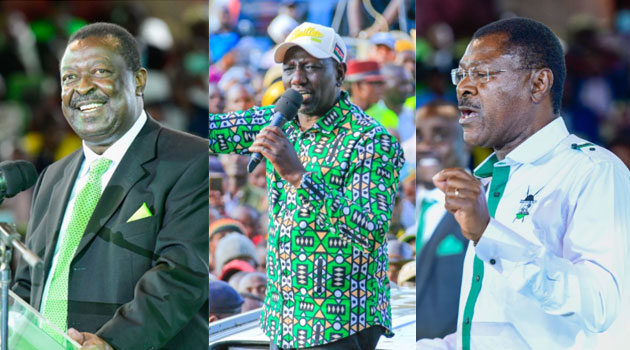 The coming together of United Democratic Alliance (UDA) of Deputy President William Ruto, Amani National Congress (ANC) of Musalia Mudavadi, and FORD Kenya of Moses Wetangula seemed to have been figured out as their fair share is revealed.

According to The Standard, DP Ruto and his new found allies have everything set in the Kenya Kwanza coalition which the three politicians agreed upon.

Against Raila Odinga’s Azimio la Umoja, it is believed Mudavadi registered Kenya kwanza coalition last year and is now the political outfit they are using in their joint rallies to popularize Ruto’s presidential bid.

The question of Musalia being a running mate for DP Ruto is not on the table as it is revealed he is set for a top ministry position under UDA government.

For Ruto’s UDA, it will take the presidency, names its deputy president and deputy governor for Nairobi County. UDA will also take the positions of Senate and Women Rep for Nairobi. Away from Nairobi, UDA will pick a Senator for Trans Nzoia.

Musalia Mudavadi and his ANC will have the party leader as Chief Minister, given a chance to pick allies for Finance and Devolution dockets as well as one more ministry. ANC is also going home with gubernatorial candidates for Nairobi, Kakamega, and Vihiga Counties.

FORD Kenya and Moses Wetangula will be given two cabinet secretary slots, free pass for Senate seat nomination and get other top government positions. FORD-K will pick gubernatorial candidates in Bungoma and Trans Nzoia counties.

With that figured out, the Deputy President position is still a headache for DP Ruto as he is pressured to pick someone from Mt Kenya region, a huge voting block and President Uhuru Kenyatta’s bedroom.

Kiharu Member of Parliament Ndindi Nyoro, Mathira MP Rigathi Gachagua, and Kandara MP Alice Wahome are among the favorites that are seen best fit for the DP post.

This was seen after DP breached protocol by inviting Wahome and Gachagua to speak after his address in Afraha Stadium in Nakuru in his first joint rally with ANC, Ford-K.