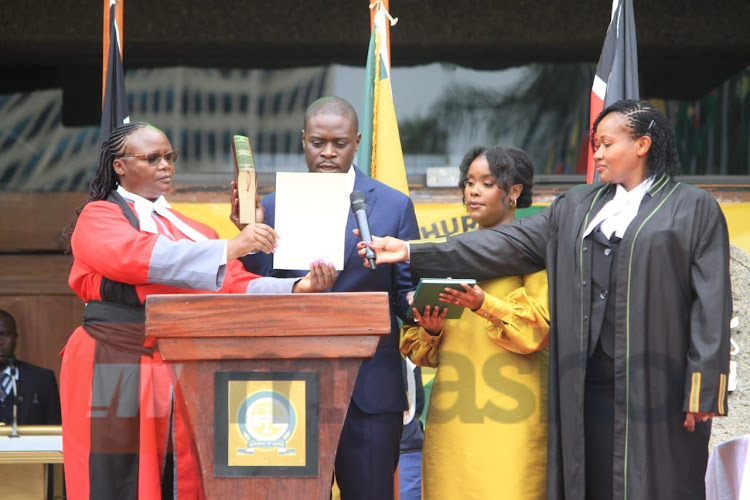 Johnson Sakaja was sworn in on 25th August as governor of Nairobi at KICC grounds.

In his speech, after being sworn in he said, ” Nairobi is full of vibrant culture, inspiration, ambition, energy, and hope. And I have always believed that all we need is a working city and we’ll become unstoppable. That we will become a regional and global force, this is what we stand for. A city of order, a city of dignity a city of hope and a city of opportunity for all. We can make Nairobi work together.”

He also gave credit to his competitor Polycarp Igathe for engaging on the issues and moving our county forward in the most positive way. He went ahead to say that Polycarp is ” a true embodiment of ‘siasa safi’ “,

” I want to thank the citizens of Nairobi. The quality of any democracy is defined by the caliber of its citizens. And in this election, the citizens of Nairobi proved their metal and made this country proud. We actively engaged in the process. We debated, we deliberated, we shared our views our aspirations, and our concerns. You showed up to vote. And most of all we maintained respect for each other which is the true definition of peace. You voted across party lines, across tribal lines, beyond that divide and we showed this country what the people of Nairobi are truly made of.”

“The symbolism of this election might be bigger than what we might understand now. But today in Mathare, in Kibera, in Roysambu, in Dandora, in Westlands, if Sakaja Johnson is the governor of Nairobi, every child knows that they can believe in the beauty of their dreams, and that tomorrow they too can be who they want to be. said governor Sakaja.

He promised Nairobi citizens a first-class county without a second class citizen.

President-elect William Ruto congratulated governor Sakaja together with all the governors who were being sworn in across the country most especially the women-elected governors.

In his speech, the president-elect said, “I pledge that the national government of Kenya will work with all the governors of Kenya in making Kenya a great nation.”