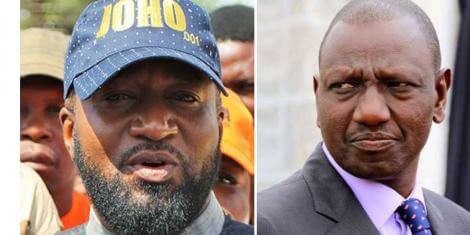 Speaking during an Azimio coalition rally over presidential candidate Raila Odinga , Joho promised it will be his first task to take back the land immediately after he is sworn in as cabinet secretary for lands.

He spoke in the same county where Ruto acquired the massive ranch that was previously owned by Taveta Mp Basil. ”In Raila’s government, no investigation will be done, that land has been grabbed and it shall be returned to the rightful owner’s, ” Joho stated.

Suna East MP junet Mohamed had earlier called for investigation to establish how the DP came to own the land that has been claimed by a section of locals.

During the kenya kwanza economic forum in Taita Taveta on may , Ruto revealed that he had acquired the ranch from the MP to offset a loan owed to the Agricultural Finance Cooporation (AFC).

Joho also took issue with Ruto’s allies in the coastal region for claiming that his appointment to the lands docket was insignificant. The Mombasa Governor, who is serving the second and last term , was promised to be a land CS slot by Odinga if he clinches the presidency in August 9, General Election.

Joho’s remarks on Taita land came a after Azimio la Umoja flagbearer Raila Odinga claimed that the Deputy President’s acquisition of the ranch was questionable and should surrendered to the locals. ” We have squatters in these region, why did he not buy the land and distribute it to the locals here?” Odinga posed.