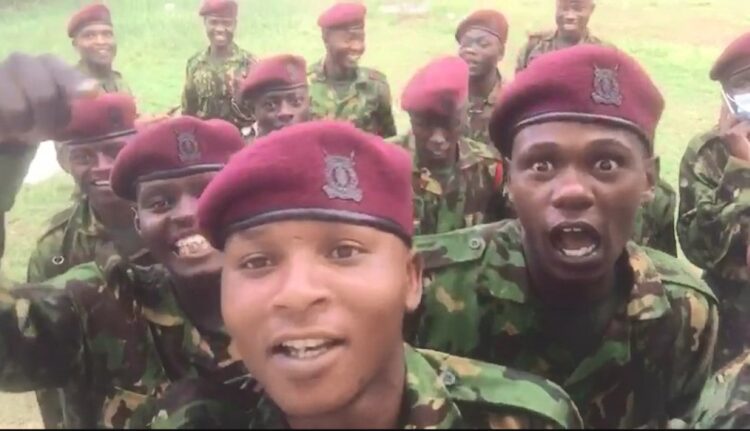 Kenyans have found it hard to settle on what is right or wrong in the video of young GSU graduands who were caught in a celebratory mood in a viral video.

The young officers were seen making comments in the video which was associated with ‘Odi’, ghetto youth slang, with signs that rubbed many the wrong way.

For some, this was derogatory utterance by the people who are supposed to maintain law and order once they are out of training. The graduands also made some signs of ‘shooting’ something that many said was a warning to whoever they were addressing.

A section of Kenyans thinks that there is nothing wrong with the video as anyone could experience the same when celebrating. But for some, this was reckless and should be dealt with.

LSK president Nelson Havi joined the debate saying that the young officers cannot be trusted with riffles after their training.

“These deranged men who the National Police Service wants to release to the Public for service as GSU officers are mentally unfit or are uniformed criminals. Questions must be asked on how they were recruited, who trained them, and why they should be let loose with rifles?” he questioned.

Reece Mwani: No no excitement. I was also overwhelmed with excitement after my admission to the bar.

Gitonga: These junior officers have only praised their GSU nothing alarming here bur we love to create mountains out of anthill.

Mkenyan: Excited, that’s irresponsible and lack of good discipline, they should have celebrated off camera that the main point!

The National Police Service has broken silence after it was tagged on social media. NPS said that the remarks were reckless and do not portray the image of the police service.

“Attention of the NPS is drawn to a video clip circulating on social media depicting newly graduated GSU officers recording themselves as they make some irresponsible and reckless remarks. We wish to clarify and assure the public that the behavior portrayed in the clip is not acceptable and does not reflect the values of the GSU, KPS and the NPS,” reads the statement in part.

Police also promised Kenyans that they will review the video and take punitive measures.

“The oath of allegiance they took as part of their graduation is a testament to the sanctity of their duty to service. The remarks as made in the clip are therefore regrettable and stand condemned. An internal review is ongoing with a view of preferring appropriate measures regarding the incident,” NPS added.

What are your thoughts on the viral video?