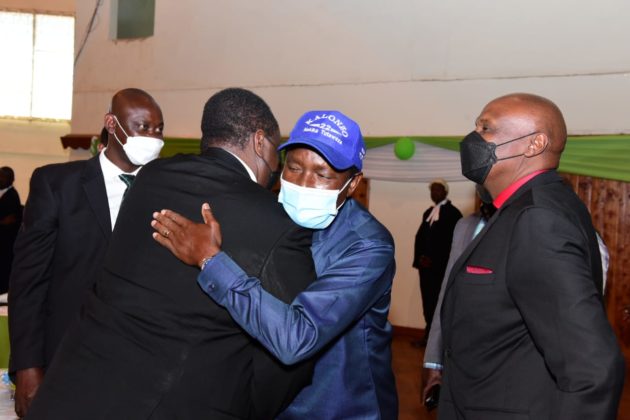 Kalonzo Musyoka of Wiper Party and his OKA, KANU counterpart Gideon Moi, have defended their walking out of Musalia’s event in Bomas saying they were not safe with some of the invited guests.

In a statement sent to media houses on Sunday evening, the two claimed that they have parted ways with ANC leader Musalia Mudavadi because they no longer believe they will cope with the kind of friends he has decided to be with, one being United Democratic Alliance (UDA) party leader, Deputy President William Ruto, and his allies.

“Unfortunately, we have to part ways since some of his friends are not our friends and we are unsafe with them,” read the statement signed by OKA spokesperson, Fredrick Okango.

One Kenya Alliance (OKA) is now on its deathbed as the two principals have announced that it is time to move on and end the political nasty games that have characterized OKA in the recent past.

“We are therefore moving to higher grounds where Kenyans are safer. It is time to move forward, it is time to end the nasty political games.”

Kalonzo and Gideon on Sunday walked out of Mudavadi’s function at the Bomas of Kenya in which he was launching his presidential bid.  The two leaders left the venue after the UDA legislators and their teams arrived at the venue, ahead of DP’s arrival. While addressing the delegates after the walkout, Kakamega Senator Cleophas Malala criticized Kalonzo and Gideon Moi, saying ANC leaders did not leave the two parties’ NDC despite inviting their friends led by ODM leader Raila Odinga.

Mudavadi said ANC as a party will allow no one to choose its friends and that their friends’ enemies were not necessarily ANC’s enemies. Ford Kenya leader Moses Wetang’ula said Mudavadi stood with him when he was ousted as Senate Minority Leader in 2018 and replaced by Siaya Senator James Orengo.