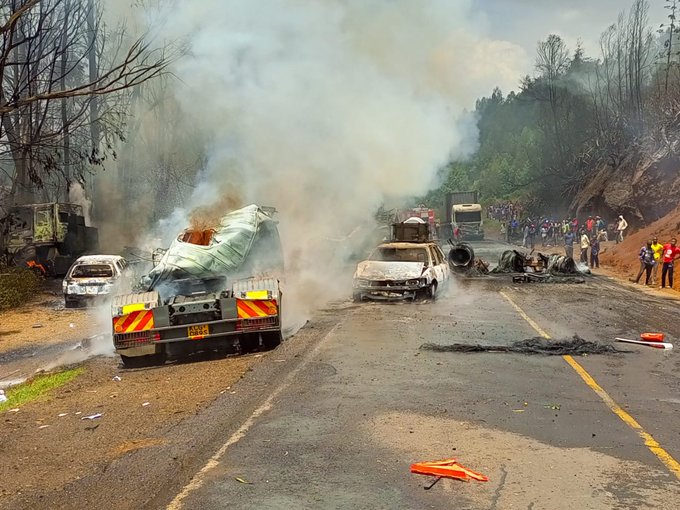 Eight cars and houses have been set on fire after gas cylinders that were being transported in a truck exploded at Mutarakwa on the Nairobi-Limuru highway.

While the police are yet to confirm the incident as well as the number of casualties if any, videos that have emerged online have painted an apocalypse-like scene. Witness reports indicate that the truck had been involved in an accident at around 6 am, but burst into flames hours later when the gas cylinders were being offloaded as efforts to move it from the road were underway.

St Johns Ambulance Kenya tweeted that the LPG cylinders exploded near Ngenia High School and by 1:41 pm it had been contained.

“The accident involved eight other vehicles which have been completely burnt. No fatalities reported and St John Ambulance volunteers have rushed all casualties to nearby hospitals,” first responders said.

St Johns’ ambulance and local police trying to control the crowd reported that six of the casualties had been rushed to Thogoto Hospital and four others to Tigoni hospital. So far, no fatality has been recorded.

Habari Leo is following the story and will update as more details emerge.