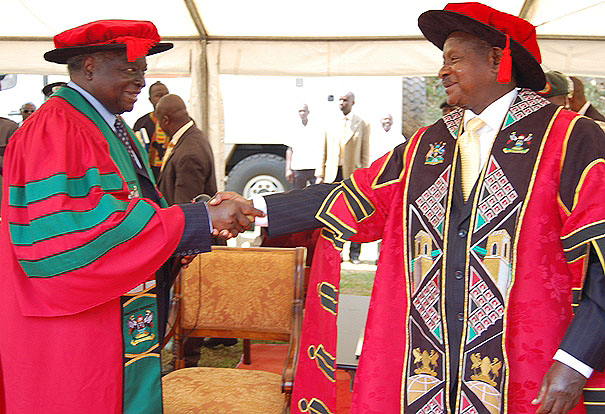 Makerere University has mourned the late former President of the Republic of Kenya H.E. Dr. Mwai Kibaki, describing him as an outstanding alumnus and that his memory will continue to bless the varsity and will forever be etched in its heart.

“Makerere University is proud of the legacy of her Gallant Alumnus, H.E. Dr. Mwai Kibaki. We believe that he lived a life that resonated with the values upon which the university was founded. We fondly remember when in August 2012, H.E. Dr. Kibaki paid us a visit as Chief Alumnus, as we celebrated 90 years of existence. We had hoped that H.E. Dr. Kibaki would join us once again, as we celebrate 100 years of Makerere University this October, but he finished this earthly race, a life well-lived,” Professor Barnabas Nawangwe, the Vice-Chancellor of the Makerere University said in a condolence note.

H.E. Dr. Kibaki graduated from the university top of his class with a First Class Honours Degree (BA) in Economics in 1955. He was a resident of Makerere University Hall. In recognition of his distinguished and outstanding contribution to public service at the national, regional, and international levels, he was bestowed an Honorary Doctorate of Laws on 24th January 2012 during the 62nd Graduation Ceremony.

Kibaki is credited with reviving Kenya’s then-ailing economy, but his tenure was marred by deadly violence that killed more than 1,200 Kenyans following his disputed re-election in December 2007 with former Prime Minister, Raila Odinga.