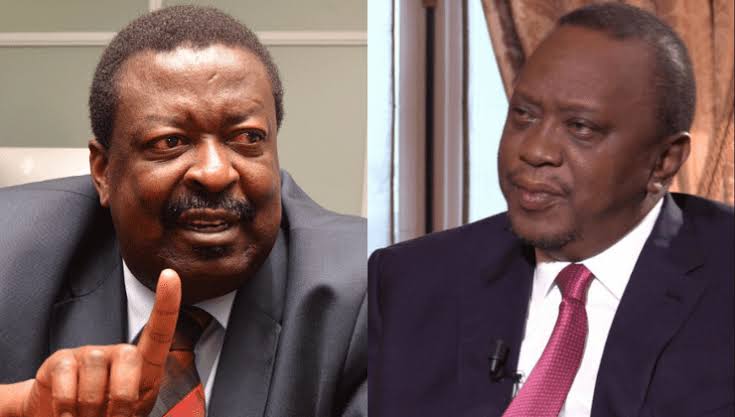 Amani National Congress party leader, Musalia Mudavadi, has attacked Uhuru Kenyatta’s Jubilee government saying they have plunged the country into very bad debt and economic hardships, therefore, making the lives of Kenyans hard. Musalia was speaking at the Bomas of Kenya, where he was launching his presidential bid

“How can we be proud that the government has bankrupted themselves and the people? How can we accept to live on our knees?” He asked the delegates who were cheering thunderously.

“Kenya is at a dangerous crossroad. The government is suffocating the goose that lays the golden egg,” he added.

Mudavadi said Kenyans are burdened because a few people do not pay taxes and are behind mega corruption. He called them thieves and liars urging Kenyans to reject their political projects and their sinister schemes during the year’s August elections. Deputy President, William Ruto, Ford Kenya leader Moses Wetangula, Governors, Senators, Members of Parliament, and other legislators were present.

Mudavadi recently castigated Uhuru for indirectly rallying Kenyans to back the candidature of his handshake partner Raila Odinga. It has now become more apparent that the leader might work closely with Deputy President ahead of the highly-anticipated elections.

While speaking at the Bomas of Kenya, DP Ruto said the parties had agreed to formally associate in the interest of the nation noting that he and Musalia were the only two candidates that have identified the economy as the place where they will begin to address the challenges facing the nation.