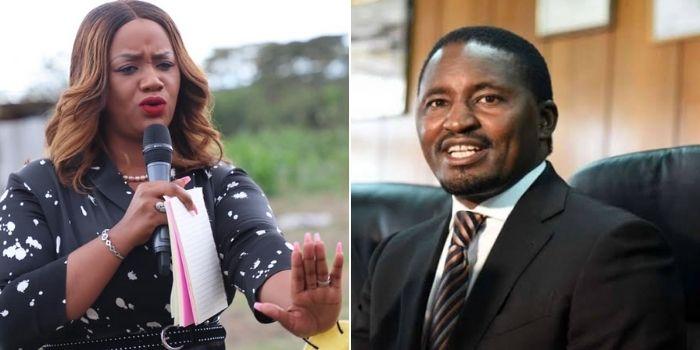 Waruguru and Kiunjuri, both supporters of DP Ruto will face off in the August 9 Elections.

Former Agriculture Cabinet Secretary and The Service Party (TSP) leader, Mwangi Kiunjuri, has finally bit off a piece of humble pie by announcing publicly his intention to contest for the Laikipia East parliamentary seat in the August 9 elections. Kiunjuri seeks to reclaim a seat he had held for 15 years between 1997 and 2013 and will meet face to face with Cate Waruguru alongside other two aspirants who are battling out for the UDA ticket.

“I am vying for the Laikipia East parliamentary seat so that I can represent my people at the country’s top decision table. My track record is still visible after my 15 years’ tenure,” Mr. Kiunjuri said on Sunday at a football match in a tournament sponsored by TSP in Matanya village in the constituency.

There have been speculations that Kiunjuri is an ideal candidate for a running mate in Ruto’s presidential bid, but he has opted to vie for Member of Parliament while at the same time pacing his bet on Ruto’s cabinet appointments.

“If I clinch this seat and Dr. Ruto appoints me to represent my people at a top-level, I will have to resign, similar to what CS Charles Keter and Joseph Nkaissery did. I urge you to vote for my friend William Ruto, and kindly vote for firm foot soldiers like Kiunjuri who will help him to run the government,” Kiunjuri told his constituents.

Kiunjuri unsuccessfully vied for the Laikipia gubernatorial post under the new constitution in 2013 after losing it to Joshua Irungu who was a newcomer in politics. He was then appointed by President Uhuru Kenyatta in 2015 as the Cabinet Secretary for Devolution and Planning taking over from Anne Waiguru who had decided to resign.

In the run-up to the 2017 elections, Mr. Kiunjuri was eyeing the Laikipia governor’s seat but shelved his plans after being advised by President Kenyatta to support governor Joshua Irungu’s re-election. When the Jubilee government retained power in the October 26th, 2017 general elections, Mwangi Kiunjuri was appointed the Cabinet Secretary for Agriculture, a post he held until 2020 when he was shown the door.