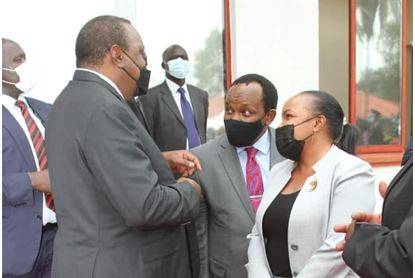 Ngirici who has since soften her fight against Uhuru’s government was among government dignitaries who joined Uhuru Kenyatta in Kiganjo National Police College for a pass out.

In a statement on social media, she lauded President Kenyatta for the work he has done in the country.

“Earlier today I joined His Excellency President Uhuru Kenyatta at the National Police College Main Campus Kiganjo in Nyeri County where he presided over the passing out parade of 298 direct entry inspectorate cadet officers,” she shared on her Facebook.

This was the first time Ngirici is seen attending Uhuru’s events after leaving Ruto in the cold. She decamped UDA after decrying unfairness in the part, thanks to Waiguru’s political move.

She will be fighting for Kirinyaga’s top seat alongside Governor Anne Waiguru among others. Ngirici was a firece critic of the handshake bettween Uhuru Kenyatta and Raila Odinga and the leadership of Waiguru.