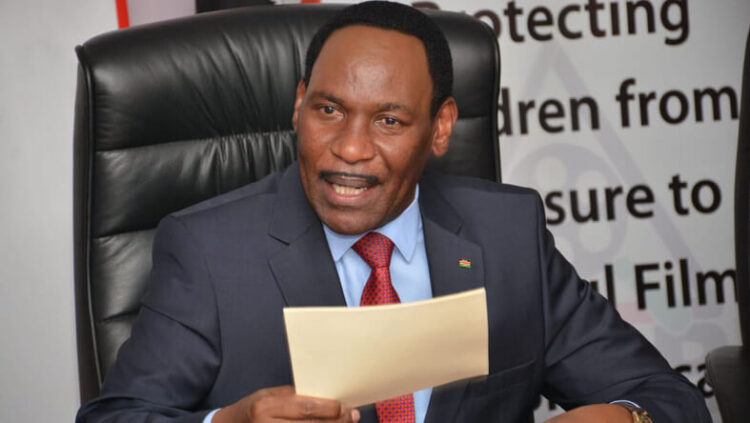 Ezekiel Mutua can be defined as a wolf in sheep’s clothing. Misplaced priorities, serving his masters, and backward way of thinking can be attributed to his self-righteousness.

Ezekiel Mutua is not new in the entertainment industry and he has played in both sides of the coin. He played as a person to countercheck content and now acts as a promoter of artistry.

Dating back to his times as the chief executive of the Kenya Film Classification Board (KFCB), the no-nonsense moral cop gave musicians a hard time in regards to productions of songs.

ALSO READ: “I Will Fight For You,” Ezekiel Mutua Promises Musicians as he Bounces Back

Mutua banned a couple of songs (with Gen Z’s Gengetone leading) in what he said was promoting social decay; pornography, murder, rape. etc.

At KFCB, he was hated more than he was loved by critics and creatives who used their talents to depict the current society we live in.

He was given many names; moral cop and deputy Jesus.

His concern of having clean content paid off with all songs and film having to pass through him for classification, he embraced the name moral policeman.

“At first I was really offended when [critics] referred to me as moral policeman, but with time I realised that not only does this country need me, but it needs more people to act as moral champions,” he was quoted by BBC in 2019.

Fast forward, in August 2021, Mutua was fired unceremoniously after he was accused of receiving irregular payments in terms of salaries and allowances.

He protested the move to eject him from office saying it was unfair and that his self-righteousness was tried and tested.

After spending some few months in the cold, Mutua made a comeback, but now as someone who is not fighting creatives but supposed to promote them.

As CEO MCSK, he promised to fight for artists and defend them.

He added, “To all Kenyan musicians my message is simple: I will work for you and with you to make music profitable and meaningful. I will fight for you, defend your rights and put conversations about music at the front table like I did with film”.

The biggest question was ‘how will he fight for them when he was the toughest critic’?

The purpose of this article was drawn from the recent happenings surrounding Sauti Sol boys band who demanded an apology from Azimio la Umoja due to copyright.

Dr Mutua said the statement issued by Kenya Copyright Board (KECOBO) was misleading since Sauti Sol as members of MCSK signed their rights to the society to administer copyright on their behalf.

Clarrifyinhg the issue, Mutua said the license given to politicians covered performing, mechanical and synchronisation.

“Regarding the claim by Sauti Sol and statement by KECOBO, MCSK wishes to clarify that the license issued covers both performing, mechanical rights & synchronisation. We thank the Raila Odinga Presidential Campaign team for complying with the copyright law and urge others to pay,” he said.

With the clash between KECOBO and MCSK, and who between them is right and wrong, the question begs, who is Ezekiel Mutua fighting for?

His tenure as KFCB CEO was loud and he loved the media clout more than the media clout loved him. As MCSK boss, his silence is deafening and he is yet to address the meagre returns musicians make every circle.

What is your take on the role of Dr Mutua?

[Kindly note that the views expressed here are entirely of the writer and do not reflect the opinions and beliefs of Habari Leo or its affiliates.]