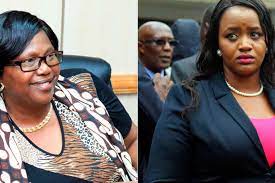 The Kenya Kwanza Alliance has promised to reward leaders who lost in the just concluded primaries across the country that was conducted last week.

UDA bigwigs; the likes of Laikipia’s Cate Waruguru. Soy MP Caleb Kositany, Wilson Sossion of Bomet among others were floored by little-known aspirants.

Some leaders who lost in the primaries have now called out the party for rigging them out while others threatening to run as independent candidates.

For those who have conceded defeat, they might just be rewarded for standing with the party. According to Kenya Kwanza Alliance principal, Bungoma Senator Moses Wetangula, those who have showed unwavering support to the party will be rewarded.

“To those of our great and dependable players who have not made it to the “first eleven” in party primaries, remain steadfast. There are just rewards awaiting you for your unwavering commitment to Kenya Kwanza(Hustler) movement,” Wetangula tweeted Monday morning.

DP Ruto had promised that the primaries would be free and fair and called upon IEBC to copy some few strategies on how to hold a successful elections.