by KELLY MARIITA
in Politics, New
0 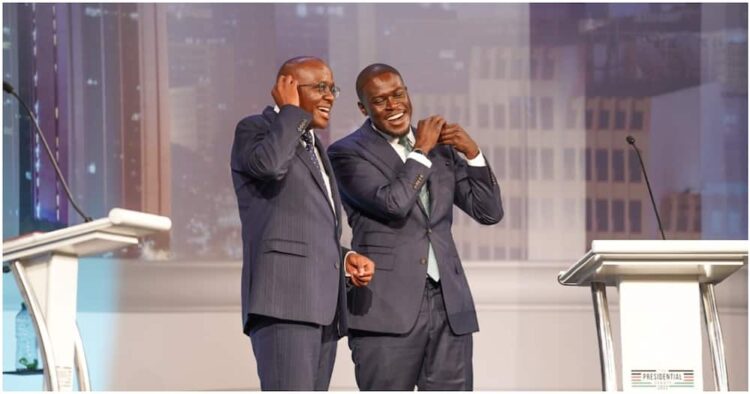 Igathe took every opportunity to criticize Sakaja about the controversy surrounding his academic credentials .Sakaja on the other hand , took advantage of the opportunity to chastise Igathe’s candidacy ,claiming that Igathe was being sponsored by the state to run.

The Nairobi Governor Debate that was held at Catholic University, which featured Azimio la Umoja candidate Polycarp Igathe and UDA candidate Johnson Sakaja ,was a slugfest ,with the two candidates going at each other at every opportunity .

While responding to questions about his governor bid, Igathe claimed to have beaten two other candidates for the jubilee ticket .He claimed that they also did not have degrees.

Sakaja, on the other hand , claimed that he had arrived at the debate at least 20 minutes late in order to give his competitor a head start.”My opponent is used to head starts ,and we are here , amezoea kupewa head starts ,there is no need to talk about head starts ,from the government ”Sakaja explained

He also mentioned on Igathe’s feud with Sonko ,which led to Igathe’s resignation as Nairobi deputy governor .

According to Sakaja that was enough proof that if push came to shove ,Igathe will leave the party . According to Sakaja ,Igathe quit after only six months on his job ,demonstrating his inability to withstand the challenges in the government.

”These city needs resilience, you need to be tough” Sakaja said.

In a rebuttal ,Igathe turned up the heat on the degree question , saying that” uttering false documents and then standing here and saying saying I have integrity”,Igathe said.

The debate reached a fever pitch after Sakaja accused Igathe of being sponsored to vie .According to Sakaja ,there are receipts to the contrary that prove that same chiefs and local administration have been paid to influence voting for Igathe.

In his defense, the former deputy Nairobi governor told the panelist that he had joined politics in 2017, and from then he has been a member of jubilee party . Igathe who appeared for for the Nairobi Governor debate alongside his competitor Johnson Sakaja said his campaigns are funded from his own pocket as well as donations from friends .”my campaigns are funded by me and my friends . ”he added