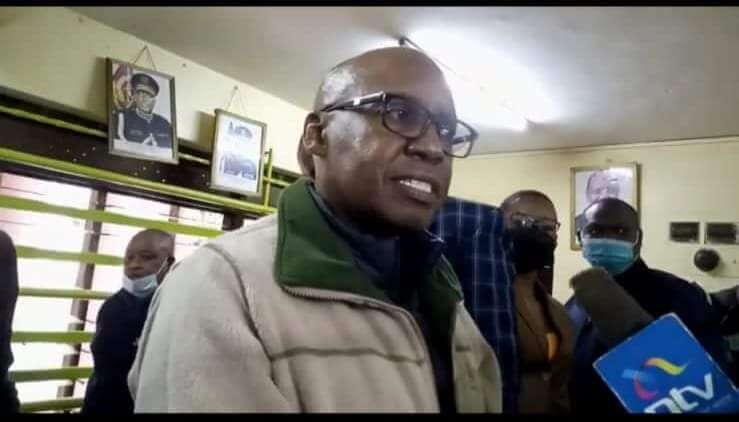 Orange Democratic Movement (ODM) presidential aspirant, Jimi Wanjigi, found himself at the wrong hands of the law Tuesday evening after he was arrested.

Jimi Wanjigi was arrested after hours of standoff with security forces and he spent the night behind bars. The Businessman was Wednesday morning arraigned at the Milimani Law Courts.

Speaking to the media, his chief campaigner, comedian Eric Omondi said that his arrest was a political ‘witch hunt’ aimed at bringing him down.

“They are not able to explain in details why we are here, we are happy, we are counting it all joy,” Eric Omondi said.

He added that the opponents are panicking because of the intense campaigns that Jimi Wanjigi has been putting.

“They wouldn’t be panicking if we had nothing to offer, these are just persecutions, Eric Omondi added.

Detectives from the Land Fraud Unit had on December 10 forwarded the inquiry file to the Director of Public Prosecutions with recommendations that Wanjigi, Nzisa, John Nyanjua Njenga and Caroline Njoki, an advocate, be charged with obtaining Sh56 million from Kenroid Limited by falsely pretending they were in a position to sell the company a 0.3314-hectare piece of land on General Mathenge road in Westlands.