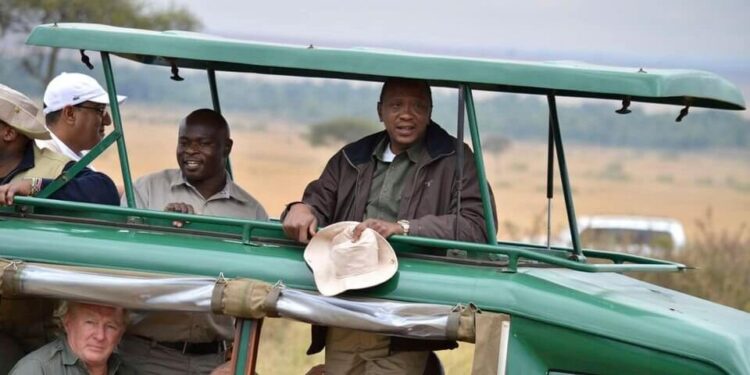 Former 4th President of the Republic of Kenya Uhuru Kenyatta has started off his holiday barely a month after handing over power to his then Deputy William Ruto.

Mr Kenyatta kept a low profile after his camp, Azimio la Umoja- One Kenya coalition, was defeated in the last elections.

Unlike his allies from the camp, he was not pushy for power and he voluntarily handed power to Dr Ruto in a peaceful and seamingless transition that baffled many African countries.

After cooling off the loss, Uhuru Kenyatta reappeared in public last week aftre he was captured on camera walking in the outskirts of Narok county.

On Sunday, a hotel at the Maasai Mara Game Reserve received an important guest as Mr Kenyatta turned up with a group of ten people for a meal at the tourist attraction destination.

“It was an ordinary reservation made for about 10 people and to our surprise, the former President and his entourage made a grand entry,” the hotel source said as quoted by Daily Nation.

As he enjoys his holiday, Raila Odinga on the other side has been attacking President William Ruto’s government and jkeeping him on check and balance.