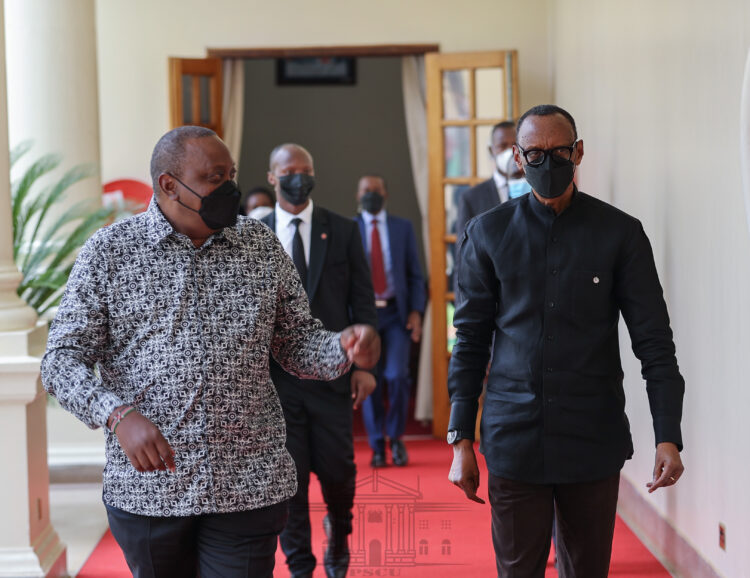 President Uhuru Kenyatta today at State House, Nairobi, held one-on-one talks with Rwanda’s President Paul Kagame who was in the country on a working visit where they discussed a wide range of areas of cooperation between the two countries including trade and transport.

The two leaders discussed emerging issues concerning the region and the continent such as trade. President Kenyatta said Rwanda’s strategic position in the region makes it an important trading partner to Kenya especially as a gateway to the Eastern Democratic Republic of Congo and the wider Great Lakes Region market.

Uhuru welcomed recent Rwanda’s move to re-open its Gatuna border with Uganda, saying it will ease the movement of goods and people between the two neighboring countries.

To enhance the bilateral trade between the two countries, President Kenyatta called on Rwanda to diversify its imports from Kenya and continue taking advantage of the improved services at the Port of Mombasa to facilitate the movement of goods.

The Kenyan leader assured his Rwandan counterpart of Kenya’s commitment to ensuring the two countries collaborate in championing the ideals of the East African Community for the benefit of the people of the region.

They both affirmed their commitment to working together to find lasting solutions to conflicts facing Ethiopia, Sudan, South Sudan and Somalia, saying Kenya and Rwanda will continue to play a leading role in promoting dialogue and peace amongst the warring parties.