Vendors who pitched tents in Naivasha during the World Rally Championship popularly known as Safari Rally are now counting losses due to low turn up.

Kenyans from all walks of life headed to Naivasha for the three stages of three-day Safari Rally as Kenya hosts the event for the second year in a row.

Thousands of Kenyans spent their weekend spectating the dusty and muddy run while others braved heavy rains to witness fast cars and capture the moments.

The sport that was officially closed Sunday afternoon by President Uhuru Kenyatta saw vendors travel far and wide to make a killing by taking advantage of the opportunity.

Habarileo conducted a research of how vendors took advantage of the large crowd with prices of foodstuff and drinks almost double the retail price.

We visited the first stage of WRC at Kedong Ranch Thursday morning ahead of Friday run and we were welcomed by chilly and dusty field where vendors including Quickmart, which was the official WRC retail partner, pitched camps.

Vendors started arranging their workstations and were ready by noon awaiting for the Friday run.

According to a few vendors we got hold of, they said they had to pay the county government up to 5,000 KSH to sell food and 10,000 to sell drinks.

With a promising start of the run, those who had set tents at Kedong Ranch made profits because only certified vendors could set tents. The remaining days were quite different for vendors because the stages were shifted to other sites including, Soysambu Conservancy, Lake Elemantaita, Loldia Ranch, and Hell’s Gate.

Many vendors who joined on the second day were spotted selling booze in car boots while others hawking local brews like Muratina.

We talked to alcohol vendors and they said that many spectators traveled with their own drinks and food while others even cooked for themselves during the stay.

Some decried hard economic times for not selling their stock and could have been dwarfed by Quickmart which was selling at the normal retail price.

Kenyans on Twitter have also shared some of their experiences and how they made losses during the event. 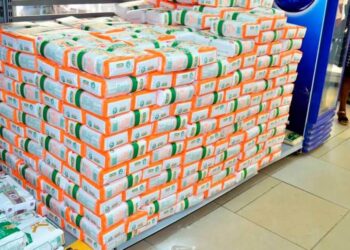 Celebration of the drop of price of Unga from Ksh 200 to 100Ksh by maize millers has been cut short...