Why Uhuru’s Loyal Men Did Not Quit To Join Politics 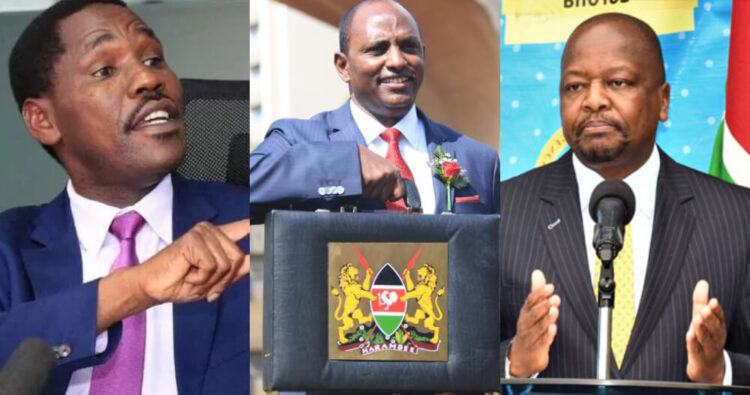 The mass exodus of Cabinet Secretaries in President Uhuru Kenyatta’s government for political seats ahead of August elections was seen as something that could paralyze transitions and his succession.

But all is not lost as some of his loyal supporters have shelved their political ambitions to help President Uhuru up to the end of his term, August 9, 2022.

But for three CSs, they said their dockets are detrimental and should not be left alone ahead of August polls.

“He has made my work a little bit easier. This is a gift to me from God, and I have to thank him and promise that we shall work together with him,” Kiraitu Murungi told press on Wednesday.

But that was just a tip of the iceberg as Habari Leo has learnt that Munya could be eyeing Raila’s running mate position. He had told resident of his county that he will be contesting for governor seat if he is not picked by Azimio team as a running mate.

“If it (running mate) becomes available, I will take it. But if it does not, I will be with you here to look for the other (governor) so that I can move forward together with you. We cannot turn down a post when it is made available for you. I am not saying that, because it has not been offered (yet),” he told residents.

For CS Kagwe, he did not resign because of Covi-19. He believes he should continue fighting for Kenyans as the world fights the deadly virus.

“No, I’m not resigning. I have given a lot of thought to this issue. We are still grappling with this pandemic, and I do not feel it will be responsible on my part to abandon the course at this critical moment to go and run for an elective position,” he said.

Treasury CS Ukur Yattani has also shelved his ambitions of taking over Marsabit County as he is ready to help President Kenyatta in smooth transition.

“I have carefully weighed the dictate of my current national duty, respect for my President and the push to offer myself as a gubernatorial candidate for Marsabit County. In this regard, I have therefore, reached the decision not to run in the forthcoming August 9 General Election but instead continue to support the President in his quest to consolidate his legacy and preside over a smooth transition,” his statement read in part.