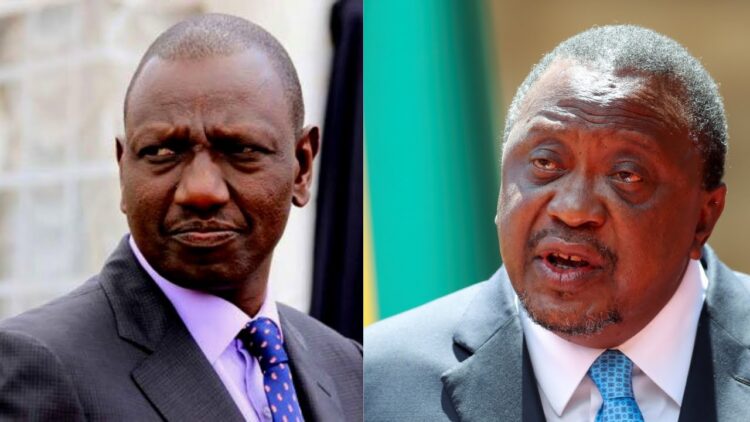 Uhuru Kenyatta, despite his promise for Ruto in 2013, has now announced his support for Raila Odinga. [Google Photo]

President Uhuru Kenyatta has officially announced his support for Raila Odinga presidency assuring the Azimio Movement that he is about to hit the road to campaign for them. The President spoke on Friday at State House Nairobi during a meeting with over 3,000 young leaders convened by the Ministry of ICT, Innovation, and Youth to review the progress of youth empowerment initiatives and affirmative action programs.

While recalling events leading up to his closing of ranks with opposition leader Raila Odinga in 2018, the youths chanted “Yote yawezekana bila Ruto…yote yawezekana bila Ruto” in unison.  A move that appeared to impress the head of state, who has in the recent weeks not shied away from the fact that he no longer does not want to hear anything about his DP, William Ruto.

“A lot of what we have been able to achieve has been as a result of peace. What we call the intangible creates an atmosphere that allows work to happen. In 2013 we got the opportunity and we were able to do what we did and we thank God. But 2017 was one of my worst and most difficult years. It was also my most trying time,” Uhuru said.

“Why? Because we were caught up in a scenario whereby the country had been divided almost down the middle. There were those who were celebrating Jubilee’s win and there were those protesting at Uhuru Park. And we had to make a choice and that choice was not an easy one,” President Kenyatta added.

He said he consulted widely before reaching out to Mr. Odinga and commended the Orange Democratic Movement (ODM) party leader for agreeing to the ‘handshake’. President Kenyatta further dismissed those opposed to his coming together with Mr. Odinga as political self-seekers driven by the pursuit for personal gain.

Uhuru Kenyatta announced that the ruling Jubilee Party will pursue alliances with the Azimio Movement and other parties and formations ahead of the August polls.

“As they speak about Jubilee Party’s death, you can also see what the party has been doing. We have been able to achieve much but there are some projects which are not complete, and hence as Jubilee (Party), we are now coming out of the office getting into real politics.

President Uhuru Kenyatta recently, while speaking during the launch of the Annual Universal Healthcare Conference in Mombasa revealed the cause of the disagreement between him and DP William Ruto that eventually ended their political romance of five years that had been characterized by among others, wearing the same suits, ties, and shirts.